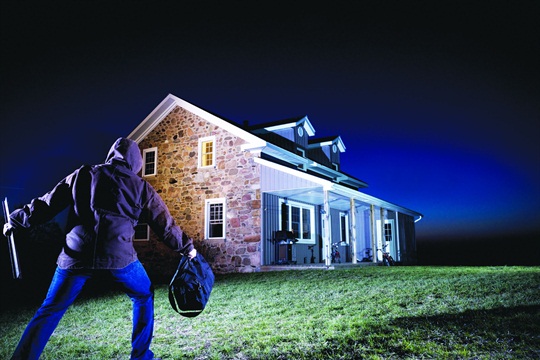 Compact motion sensors are devices which trigger alarms, lights, surveillance cameras, and/or monitoring services when any unexpected movement is detected. These form essential parts of many home security systems, so let's discuss the main types of sensors and their differences.

The two main kinds of sensors are active and passive units. An active device generates energy in the form of microwaves or audio waves. Alternately, it may use infrared lights. Passive units detect movement without releasing energy. Both types are available in multiple varieties.

Generally, motion detectors are active whenever the alarm equipment is "armed." Homeowners usually arm security systems when their dwellings are vacant for more than a few minutes. Utility lines or batteries must supply power for the sensors to detect movement and send signals to the main control panel.

Although the primary objective of a motion detector is to sense intruders, homeowners use them in several ways. For example, a sensor could warn parents when children enter potentially dangerous parts of a home. It can also conserve power or video storage space by only activating lights and surveillance cameras when they're needed.

The simplest kind of passive detector features a weighted lever that moves when vibration occurs nearby. Once disturbed it triggers a switch and activates the security system. Although inexpensive and easy to construct, these units are prone to trigger false alarms. Many things can cause vibration, such as heavy trucks on nearby roads.

A more common "passive" technology senses heat from bodies by detecting the infrared light they produce. If the heat moves around quickly, this kind of sensor will notify the alarm system. These comparatively reliable and economical units are often installed on doors and windows.

A number of active detectors feature LEDs that reflect invisible light off objects to determine their locations. This infrared light is similar to the beams that TV remote controls produce. Electronics can "see" them, but humans can't. These sensors keep track of item positions and report movement when they change.

Some of the more costly sensors generate microwave energy which bounces off items. This technology maximizes the coverage area but is subject to interference from electrical equipment. Other motion detectors use the same concept but transmit ultrasonic sounds that humans can't hear. Basically, all active sensors work by using reflection to measure distances.

Generally, two of the more desirable motion detectors are infrared and ultrasonic units. Each type of motion sensor is capable of producing false alarms, however, and could be triggered by interference, thunderstorms, insects or electrical surges. This problem is minimized by combining two different types of sensors. They only report movement to the security system if both sensors are triggered at the same time.

Regardless of what type of motion detector is to be used, there are certain parts of a home that need them. It's wise to install them in the main bedroom and any room that contains costly belongings. Put them in places that a burglar would probably need to pass through, such as entrances and hallways.

The proper placement of a detector can reduce the risk of temperature and other related malfunctions. For example, it's best to avoid putting passive infrared units where they will be affected by bright sunlight or heating equipment. Consider using a different detector technology in these areas.

The vast majority of modern sensors that operate wirelessly can be easily installed, but with so many types of sensors and potential technical issues, it makes sense to hire an experienced professional to install motion-sensing devices and other security equipment. A dual-method sensor will deliver the best results, albeit at greater expense. These devices can make a home much safer, efficient and secure, however, but only when they are selected and installed with care.